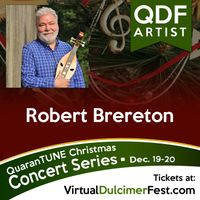 So proud to be part of this fantastic Christmas concert series. Some of the finest dulcimer players in the world playing Christmas music for two days via zoom, December 19 and 20. I'll be closing the show Monday, December 20 starting at 9:36 pm eastern. Tickets below. https://www.virtualdulcimerfest.com/christmas

Spring Fling Dulcimer Festival hosted by Nonsuch Dulcimer Club, UK https://www.dulcimer.org.uk/event/spring-fling-online-2021/ Come along as we join this delightful dulcimer group from England. This online festival is open to the all no matter your location!

Rob Brereton is considered one of the pioneers in contemporary mountain dulcimer playing. His years of studying classical guitar have polished his playing style while his degree in music theory and composition has given him a fresh approach to arranging.

Rob was one of the first dulcimer players to arrange extensively in chromatic and other alternate tunings. Although he specializes in the standards and early jazz tunes of Duke Ellington, George Gershwin, and the like, Rob is equally adept at playing the more traditional celtic, Appalachian, old time, and other dulcimer repertoire.

Rob has taught all levels of dulcimer at most major music festivals and folk schools across the country as well as internationally. He has won several awards for his playing including a coveted Winfield National flatpicking award. Rob was one of the organizers of the Housatonic Dulcimer Celebration and continues to organize the occasional Dulcimer Cruise. He has been playing dulcimer for over 30 years and has been an internationally recognized performer and instructor since his first CD was released in 1992. David Schnaufer called Rob's playing "...strong and innovative."

Rob's music is featured on his recording, Someone to Watch Over Me available for download on iTunes, CD Baby, and most other music download sites.

In addition, Rob teaches K-6 music and has many private students. He also composes, arranges, and he directs several choirs near his home in CT. If you're interested in Rob teaching privately or at a venue, feel free to contact him.

Much to his friends' dismay, he also yodels. Please don't hold this against him.